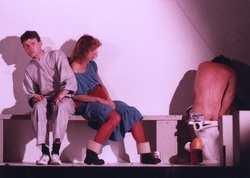 1984: The Future is Now (1984)
As the hoped-for emergence of a new generation of dramatists and dramatic works takes place, it may be affirmed that this rebirth will necessitate new means of expression. For works that are all observation and study, actors are needed who are spontaneous and authentic, in touch with reality through and through.

The art of the actor, then, will no longer depend, as in previous repertories, on physical qualities or natural gifts; it will gain its life from truth, observation, and the direct study of nature...

Since the theatrical style of the new play tends to keep close to daily conversation, the actor must no longer 'speak' in the classic theatrical sense; he must 'talk' - which without doubt will be just as difficult. What is meant at present by the phrase the art of speaking, consists solely in endowing the student with an exaggerated articulation and concocting a voice for him: a peculiar specialised organ quite different from the one he really has. For sixty years, all actors have uniformly spoken through the nose, solely because this way of speaking has to be adopted for them to be heard by the audiences in our theatres, which are either much too big or have poor acoustics; and also because this nasal voice is resistant to the passing years and does not age.

A pencil revolved or a cup tipped over will have as much significance and as intense an effect on the audience as the grandiloquent exaggerations of the romantic theatre.

(back to Manifesto page)