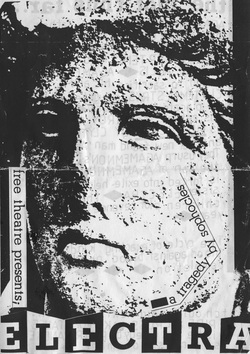 Agamememnon, Electra's father while lading his army to Troy, incurred the wrath of the gods. The goddess Artemis held back the wnds at Aulis. Agamemnon was forced to sacrifice his and Clytemnestra's daughter Iphignia to placate the goddess. On his return from Troy, Agamemnon is murdered by Clytemnestra and her new man Aegisthus. They usurp Agamemnon's throne while the son of Agamemnon, Orestes is forced into explie helped by his sister Electra. The two children plot revenge over long years.

The cycle of exacting kindred blood against blood nears completion.