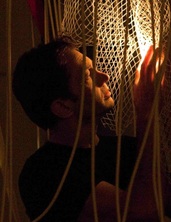 I Sing the Body Electric (2012)
Stuart McKay is currently working on PhD thesis based on the films of Andrei Tarkovsky at the University of Canterbury. His work with the Free Theatre has included Footprints/Tapuwae (2015), Earthquake in Chile (2011) and I Sing The Body Electric (2012). He has also collaborated with The Clinic (Chch); Cutting Edge Theatre (Nelson); and the Hagley Theatre Company (Chch). He has been involved in bands, solo acts, electro-acoustic recording, performance poetry, writing and film over the last fifteen years. as well as hosting radio shows concerned with local music and spoken word at Fresh F.M. in Nelson.