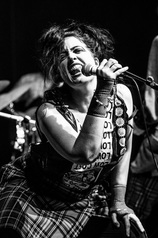 Punk Ubu Night (2016)
Greta's introduction to Free Theatre as a young girl watching her father Robin rehearse and perform, had a lasting impact. Since 1992 Greta has worked as an actor, teacher and theatre producer for the company. She has worked as an actor on numerous productions including MedeaMaterial, The Empire Builders, The Last Days of Mankind, Fantasia, Faust Chroma, The Black Rider, Alice and Ars Acustica. During this period she has worked on the production team, involved in promotions, tour management and marketing, including tours of Faust Chroma to Palmerston North and Wellington, and Distraction Camp to BATS, Wellington. Greta was employed as Departmental Administrator for the Theatre and Film Studies Department at the University of Canterbury, where she spearheaded marketing, budgeting, and the management of performance venues.  Since 2010 she has also worked as a producer for A Different Light Theatre Company, managing a tour to the Society of Disability Studies Conference in San Jose, California in 2011 and a tour to Ludus Festival Leeds in 2012, as well as Christchurch based productions of Wizard of Oz (2010), Still Lives (2011), and The Lonely and The Lovely (2012).